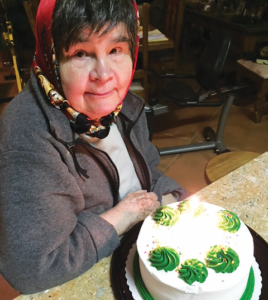 Phillis Ann Moutray, beloved wife, mother, grandmother and great-grandmother passed away June 21, 2018 at home in the Sawtooth mountains of Idaho. She was 78 years old.

Phillis was born on March 14, 1940 to Lawrence and Dorothy Davis in Carlsbad, New Mexico. She graduated from Carlsbad High School in 1958. Phillis enjoyed spending time with her friends Dona and Carlyn at the Arrowhead having cake and listening to the jukebox. She attended Campfire Camp in the Sacramento Mountains in the summers where she participated in many activities including hiking, horseback riding, cooking outside and performing original skits.

She married Jim B. Moutray Jr. on Christmas Day 1960 in Carlsbad, New Mexico. After their wedding they lived at the Moutray Brothers Seven Rivers farm where Jim B. helped to run operations. Phillis and Jim welcomed six children; Lorie, Jamie, Corey, Amy, Jason and Anne. They made their home for many years in Ames, Iowa. The couple have lived in Sonoita seven months a year for the last twelve years.

Phillis was preceded in death by her parents Lawrence and Dorothy Davis and daughter Jamie Moutray.